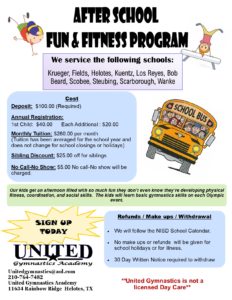 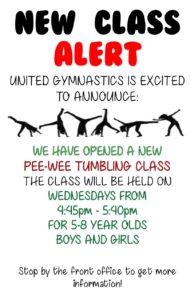 Check out our Summer Camp and sign up! Please call the office or come in to sign up your kids to have fun at our summer camp! 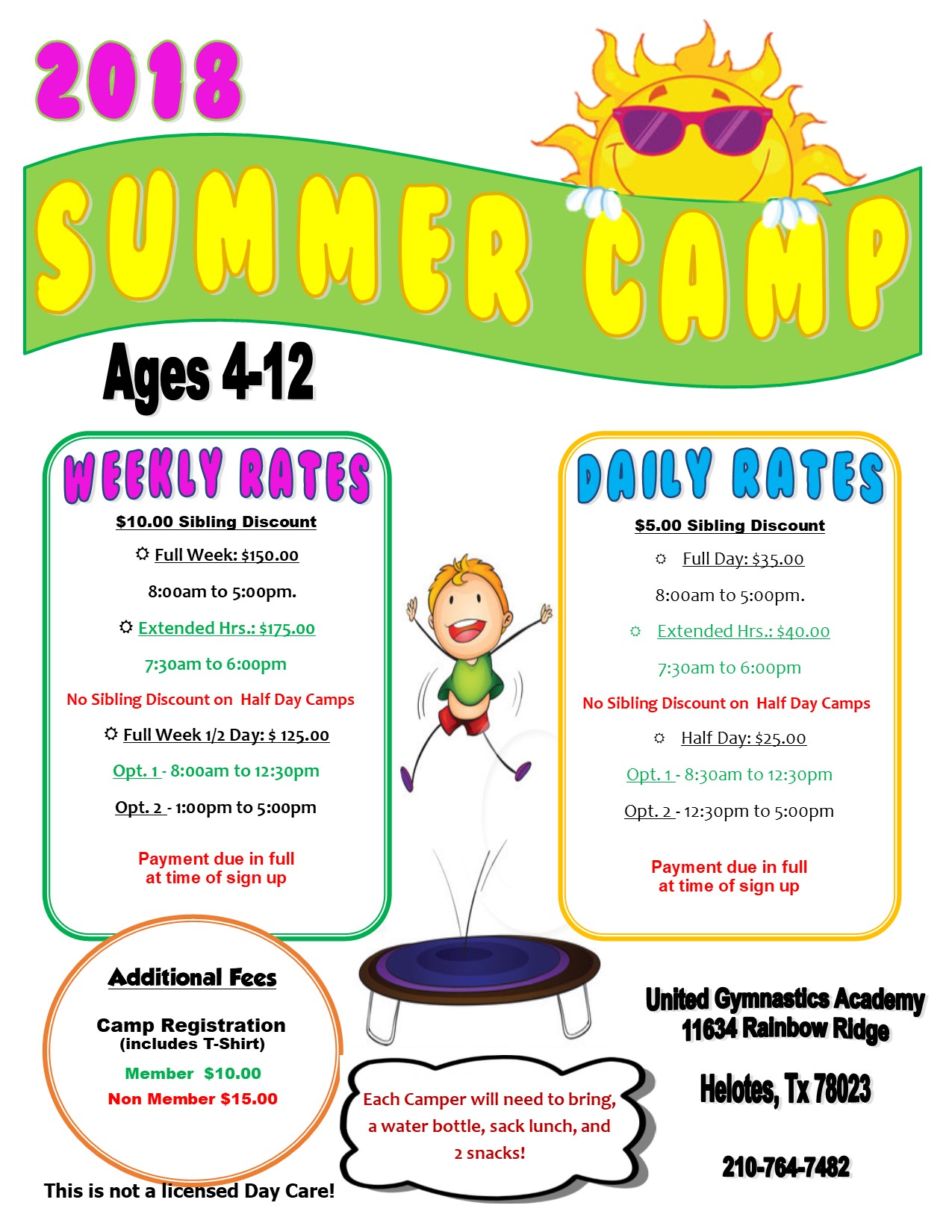 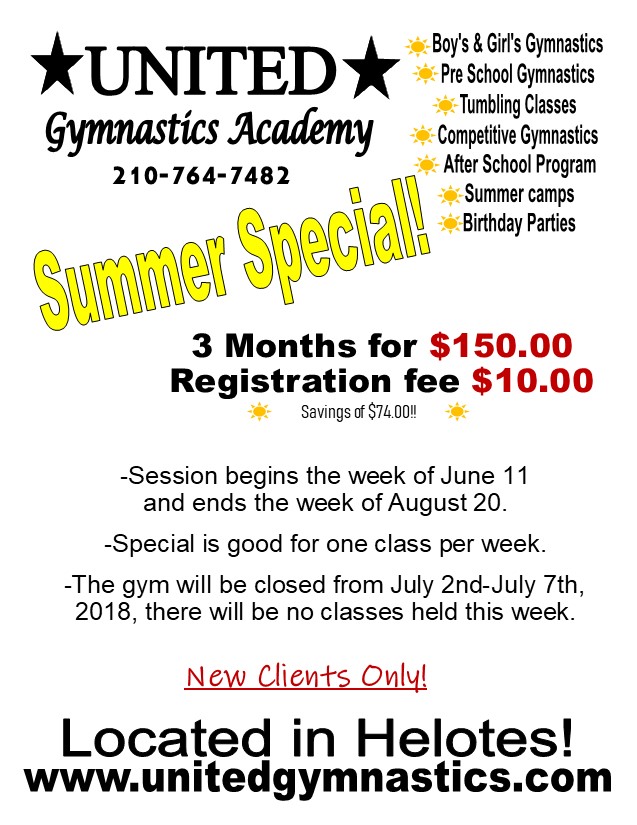 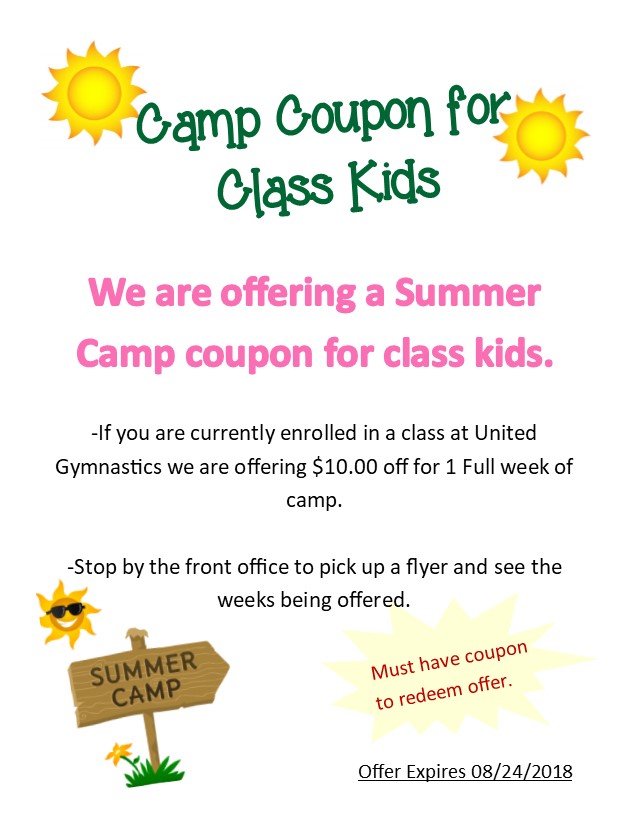 Good luck to all our Level 5s that are competing this weekend!
Safe Travels! 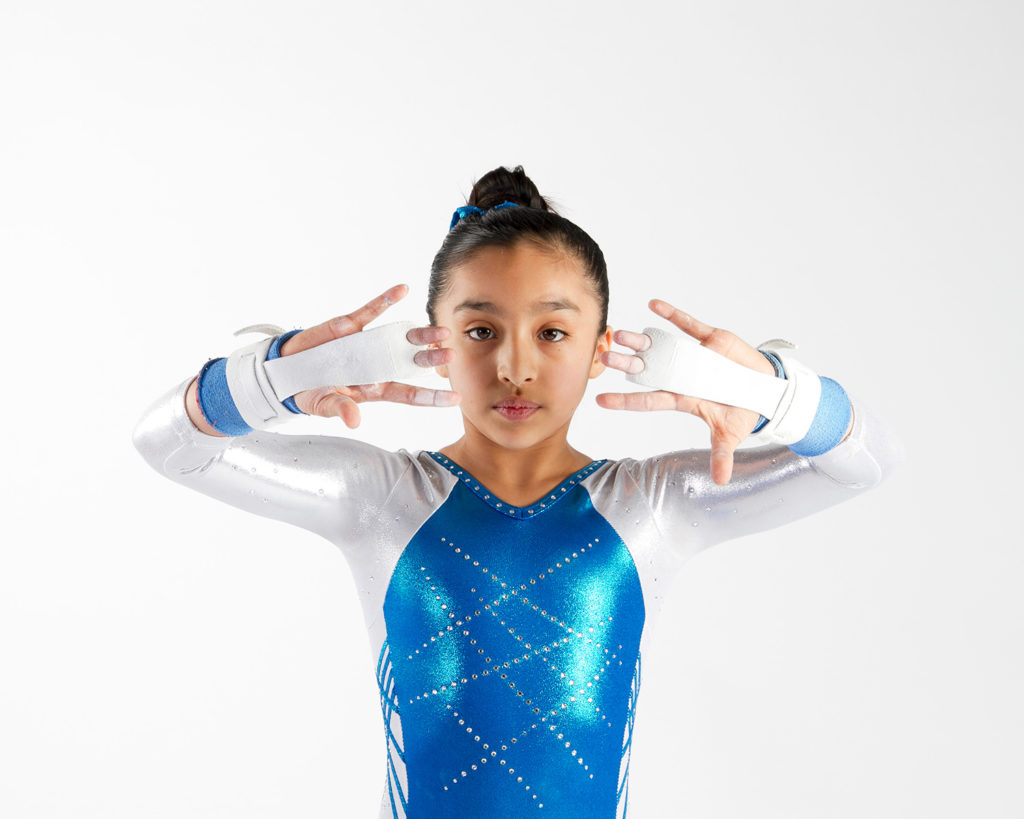 Analisa Lopez was born on February 22, 2006, to Laura and Robert Lopez. Analisa began gymnastics at the age of four and began competing at the age of six in 2012 as a level 4.Analisa began her optional “career” during the Winter/Spring 2015 season. At her first meet of the season, Analisa placed third on bars and in the all around. While Analisa qualified to the Texas State Championships, she did not compete.

During the Summer of 2015, Analisa participated in TOPs Testing, qualified to National Testing, and made the TOPs National B Team. As a level 8 in 2016, Analisa began training and competing with United Gymnastics Academy. At her first level 8 meet, Analisa won the all around and placed second on vault. At the 2016 Level 8 State Meet, Analisa placed sixth all around with a 37.700 and qualified to regionals. At the Region 3 Championships, Analisa won the vault title with a 9.450 and tied for sixth all around with a 37.750. Over the Summer of 2016, Analisa prepared for both level 9 and Hopes which she would aim to qualify for during the 2017 season.

Analisa started her 2017 level 9 season at the Texas Shootout meet where she won the vault, floor, and all around titles. Throughout the season, Analisa continued to improve and had her best showing at the Texas Level 9 State Meet where she placed fifth on vault and fifth on floor. At regionals, Analisa had an uncharacteristic bar routine which kept her from qualifying to Westerns. Fortunately, Analisa’s season wasn’t over. After her Region 3 Championships, Analisa began preparing for the Parkettes National Elite Qualifier where she would need a 32.00 compulsory score and a 45.00 optional score to qualify. Analisa’s first day of competition was the compulsory qualifier where she scored a 33.050 and achieved her Hopes 10-11 compulsory score. On the second day, Analisa achieved her Hopes 10-11 optional score with a 45.150 as well as a first place finish on vault. These two qualifying scores qualified Analisa to the Hopes Classic on July 7 at the National Team Training Center in Huntsville, TX. In order for Analisa to qualify to the Hopes Championships from the Hopes Classic, she would need to score a 45.00 in the all around and place in the top 18. Analisa did just that scoring a 45.500 and placing 14th. Analisa also took home the silver on vault. The Hopes Championships took place on July 28, 2017 in Hoffman Estates, Chicago. Analisa had the best Hopes meet of her season so far finishing fourth on vault, sixth on floor, and ninth all around with a 46.400.Currently, Analisa trains 32 hours per week under coaches Amanda and Paul Rocha. Right now, Analisa is preparing for her 2018 season. In the future, Analisa hopes to earn a college scholarship for gymnastics.

Congratulations to our Level 4 State Qualifiers!

They did awesome this weekend!!!!

There are no upcoming events at this time.

Celebrate your Birthday w/ Us!

DUE to COVID19 we are not currently offering Birthday Parties! A Birthday Party … END_OF_DOCUMENT_TOKEN_TO_BE_REPLACED

At United Gymnastics Academy we offer a variety of classes for all levels of interest, motivation, and skill level. For many of the students this will … END_OF_DOCUMENT_TOKEN_TO_BE_REPLACED

No images found!
Try some other hashtag or username